Types of insects we can help remove 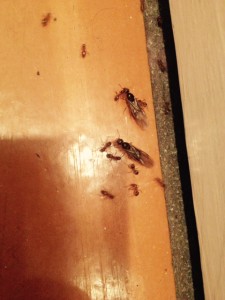 Got pavement ants everywhere? We are your Perth Pavement Ant Control experts!

As their name suggests, pavement ants usually make their homes under sidewalks and driveways, building slabs and large rocks. In early spring, colonies attempt to conquer new areas and often attack nearby enemy colonies. These result in huge sidewalk battles – very cool to watch if you are 5 or 6 years old!

During the summer time the pavement ants dig out the sand in between the pavements to vent the nests and to make room to lay eggs.

Pavement ants are dark brown in colour and measure 2.5 – 4 mm in length.

Winged reproductive ants typically swarm in the spring but have been known to emerge any time of the year in heated structures. After emergence, the ants mate and the queens burrow into the soil to begin laying more eggs.

Moisture ants like the damp and will usually nest in rotting wood. Moisture ants love sweets and will often come into homes to feed on any sugar left unprotected.

Because they inhabit wood, they can cause decay in a persons home as their tunneling will weaken a homes structure.

Ant colonies are started from a single pregnant female (queen) and can grow up to several thousand individuals over time. During the summer and fall, reproductive ants (males and queens) are produced by the colony and it is at this time that you will see the ants swarming for about 2 to 7 days.

“We’ve got the ants with the wings!!”

A common misconception about ants is that winged ants are a species separate from all other ants. Every type of ant has reproductive swarmers (or winged ants) in it’s colony and every ant colony “swarms” once a year. Winged ants can be carpenter ants, pavement ants, moisture ants, cornfield ants etc.

An ant swarm is a collection of the reproductive males and females only (reproductives are the only ants with wings in a colony). After mating, the males drop dead and the females fly on to try and establish new colonies the following year.

In addition to restaurants and other food establishments, cockroaches can be found in residential homes and even businesses without stored food products.

The German cockroach is most prevalent in the Perth. They can be found in kitchens, pantry closets, bathrooms and appliances.

Excellent sanitation is a very important part of eliminating them from any home or establishment. In addition to our treatment programs, we will provide specific recommendations that will help you eliminate the cockroaches from your home or facility.

Experts in all types of insect control in Perth

After a few simple questions, free estimates can be given over the phone for insect control in All Perth Metro and Country Areas. Call the Perth Pest Control experts now at 086-313-5711 or contact Frank Pest Control Perth by email.

In addition to insect control and prevention, we also specialize in complete clean-ups of the affected area.

In every interaction I have ever had with Frank Pest Control Perth, I have been super impressed with this company. From beginning to end, it is evident that every person in the company wants the customer to have a good experience with good results, from the owner, to the people on the phones, to the people who come to the door. You guys go above and beyond to make sure that the job is done right, unlike other pest control companies we’ve tried working with before. It’s such a relief to be fa… END_OF_DOCUMENT_TOKEN_TO_BE_REPLACED

It was really great service. I am more than satisfied and have already recommended you to my neighbor. I can honestly say it was one of the best examples of customer service I have received in a long time, starting with a live person actually answering the phone when I first called. I almost could not believe it! Then the no hassle follow up to honor the guarantee, and the second call really seem to finish off those ants. I wish all service providers delivered like you guys. Keep up the good … END_OF_DOCUMENT_TOKEN_TO_BE_REPLACED

We just wanted to drop you a quick note to thank the Frank Pest Control Perth team for its excellent service! Amanda was fantastic, answering our initial calls and questions and helping us make an appointment booking. Brennan was a rockstar, systemically going through our place, giving us insights into where/how mice could gain entry, and helping us close one area that was the source of the problem. Super-friendly, he also answered our many, many questions. We grabbed a few extra busine… END_OF_DOCUMENT_TOKEN_TO_BE_REPLACED

We were extremely happy with the service received from Westside. This is the second time we used your service and were once again 100% satisfied. Both Brennan and Jagger were a pleasure to deal with. They were courteous, extremely knowledgeable and reassuring and turned a stressful pest situation into a laugh or two! At this point, we have had no further signs of the rats or the horrible smell in our kitchen. Hopefully the problem is solved for good. I would not hesitate for a second to … END_OF_DOCUMENT_TOKEN_TO_BE_REPLACED

If you want a service that comes in and takes care of everything at a very reasonable cost – this is the company for you. We had a squirrel wreaking the outside of our house, and they took care of completely repairing the area, which was not really within their service, but did it anyways because we needed it fixed. They even went to get the wood needed and from my perspective made our lives a lot easier by ensuring the whole process was complete. The serviceman was friendly, on time, and did … END_OF_DOCUMENT_TOKEN_TO_BE_REPLACED