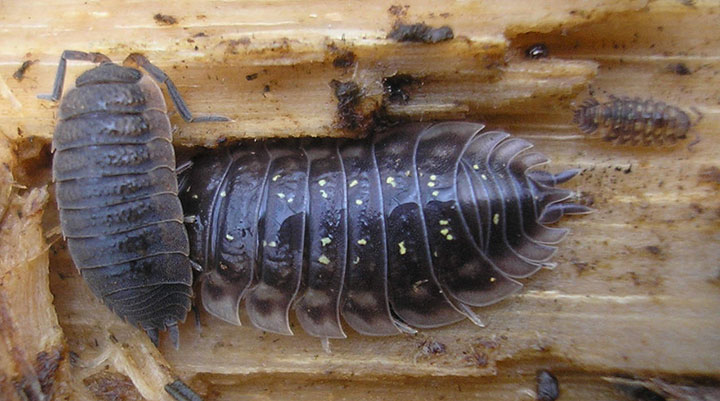 Sow bugs are commonly referred to as Woodlouse, wood bugs or pill bugs. They resemble miniature armadillos. They are completely harmless to people and the structure of your home or building in Greater Perth WA. 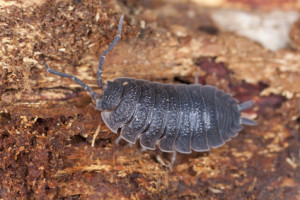 Sow bugs are commonly found in rotting wood, under rocks, landscaping ties and sidewalks. They often also reside between the foundation of a structure and the dirt, sand or soil in direct contact with it. Sow bugs reside in these different areas because they require very high levels of moisture for survival. They do however still require a limited amount of oxygen.

When we receive heavy rain here in the Perth area, the there is not enough oxygen in many of these places in close contact with a house or other building. the sow bugs, looking to escape the wet, get flushed inside seeking better living conditions. They frequently enter through window and door frames as well as just below baseboards. When they come into the home, there is not enough moisture for them and they quickly dehydrate and die.

There is no need to spray any pesticides as the sow bugs will dehydrate and die just as quickly indoors as they would as the result from a chemical treatment. 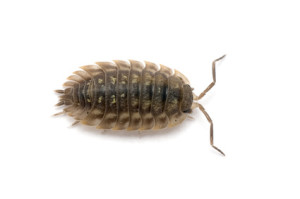 We can preform an outdoor preventative application, however this work is not guaranteed and when the residual wears off there is no reason the sow bugs will not resume there attack.

The best solution and long term of defense against sow bugs is preventing their entry into a home or other structure. Prevention is best achieved by filling any gaps along the outside along the foundation and door frames with caulking, silicone or expanding foam. Areas to concentrate on filling:

Sealing these areas well will not only help to keep out sow bugs and other insects but will also save you money by increasing the efficiency of heating and cooling your home.

As sow bugs are completely harmless a good method to removed the dried up bugs is your household vacuum.

Sow bugs are commonly found in rotting wood, under rocks, landscaping ties and sidewalks. They often also reside between the foundation of a structure and the dirt, sand or soil in direct contact with it. Sow bugs reside in these different areas because they require very high levels of moisture for survival. They do however still require a limited amount of oxygen. 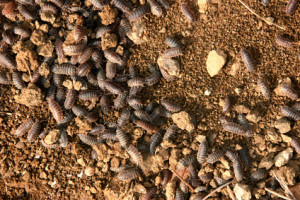 Sow bugs are often located in outdoor areas such as patios and pool decks. They often emerge from cracks between concrete and pool tiles or patios and retaining walls or foundation walls.

The reason for the sow bugs sudden emergence is usually related to recent rainfall. Although the bugs do require a significant amount of moisture, when there is not enough oxygen, they head out to find some. In most cases when they reach a patio or deck surface, if they remain there, they normally dehydrate and die quite quickly. This is why it is most common to see lots of dead sow bugs as opposed to live ones.

Chemicals are not usually a suggested treatment as the bugs will likely dehydrate when they emerge from their hiding place. The best method to keep sow bugs from coming back again is physical prevention. Filling any cracks with Silicone, caulking or concrete patch are 3 great methods to keep them off your patio or pool deck.

As sow bugs are completely harmless, if you do happen to still get the occasional one finding it’s way onto the patio, pool deck, garage or any other area, a quick sweep or vacuum should do the trick.

Looking for help with sow bug removal in the Perth area?

After a few simple questions, free estimates can be given over the phone for sow bug removal in Perth and the rest of the Lower Mainland. Call the Perth Pest Control experts now at 086-313-5711 or contact Frank Pest Control Perth by email.

We are very happy with the level of service we have received from Frank Pest Control Perth. Jeremy has been extremely helpful in dealing with the mice problems in our house. He is knowledgeable and very polite, and his calm and caring manner helped reduce my mice-induced stress! I would highly recommend Frank Pest Control Perth to anyone who is having pest problems. I am very glad we found your company through your website.

Garen came and treated my house and garage for carpenter ants. He was very prompt, very professional, and very knowledge. And the treatment is working. I’ve seen lots of them dead, dead, dead. Yeah!”

It was really great service. I am more than satisfied and have already recommended you to my neighbor. I can honestly say it was one of the best examples of customer service I have received in a long time, starting with a live person actually answering the phone when I first called. I almost could not believe it! Then the no hassle follow up to honor the guarantee, and the second call really seem to finish off those ants. I wish all service providers delivered like you guys. Keep up the good … END_OF_DOCUMENT_TOKEN_TO_BE_REPLACED

We were extremely happy with the service received from Westside. This is the second time we used your service and were once again 100% satisfied. Both Brennan and Jagger were a pleasure to deal with. They were courteous, extremely knowledgeable and reassuring and turned a stressful pest situation into a laugh or two! At this point, we have had no further signs of the rats or the horrible smell in our kitchen. Hopefully the problem is solved for good. I would not hesitate for a second to … END_OF_DOCUMENT_TOKEN_TO_BE_REPLACED

If you want a service that comes in and takes care of everything at a very reasonable cost – this is the company for you. We had a squirrel wreaking the outside of our house, and they took care of completely repairing the area, which was not really within their service, but did it anyways because we needed it fixed. They even went to get the wood needed and from my perspective made our lives a lot easier by ensuring the whole process was complete. The serviceman was friendly, on time, and did … END_OF_DOCUMENT_TOKEN_TO_BE_REPLACED